The City of Montebello is located in Los Angeles County, California in the southwestern area of the San Gabriel Valley. The transportation department operates Montebello Bus Lines (MBL), with the primary responsibility to provide transportation services to the residents of Montebello and neighboring cities. In all, the 72 buses MBL operates cover 26 square miles and serve over 8 million passengers per year.

The Challenge of Ensuring Safety as well as Controlling Costs

With over 8 million passengers traveling on MBL every year, there is an enormous responsibility to ensure the safety of those being transported. One aspect of this is video monitoring of traffic and all activities and interactions between the passengers and drivers.

Each MBL bus was equipped with five video cameras and a recording system for this purpose. Video was recorded locally on the bus; when the bus returned to the terminal the video data would be transferred to the operations center. If an incident was reported, the data could be retrieved for review.

This presented two major operational challenges: First, due to the complex logistics, video was not immediately available for review when needed. The time required to upload data and locate relevant clips made it difficult to quickly follow up on reported incidents.

David Tsuen, IT Manager for the City of Montebello, commented, “We had to manually locate clips using timecodes, which was very time-consuming. Even worse was trying to synchronize clips from multiple cameras for different views. That was impossible.”

Second, budget limitations made it impossible to retain data longer than 60 days. This was a problem because an incident could result in legal action as late as two years after the fact. For cases filed after the 60-day retention period, the lack of a video record put the City at financial risk. Longer term storage was clearly a requirement.

In an effort to improve public safety and to reduce the burden on the staff as well as storage budget, a new solution was sought by MBL.

After reviewing video surveillance offerings, it became apparent to MBL that no off-the-shelf solution combined the needed elements. The desire was to have a solution that recorded video locally on each bus, but also allowed video to be uploaded wirelessly whenever needed to allow immediate review by transit staff or law enforcement.

During normal operations, the video would be streamed on a set schedule (every 3 hours or so) from local storage to the main storage system using either LTE or WiFi. In the event of an emergency, the driver or public safety officer could initiate a capture that would immediately be streamed to the main storage system, thus making the video instantly available. Furthermore, this eliminated the risk of data loss in an accident.

To overcome these limitations, MBL created a system that combined two technologies:

The selection of the Stream It system provided the exact functionality MBL desired. Stream It manages the capturing of video and associated metadata from intelligent cameras. When stored locally, the Stream It software maintains a local database which contains the metadata. Once the transfer to the Cloudian Hyperstore is initiated, the metadata is extracted from the database and added to each video.

A functional alpha version of the overall solution includes seven buses in the MBL fleet. As testing is completed the project will move toward beta testing. Once in place, Montebello Bus Lines will have a mobile security system deployed in their fleet that gives them real-time visibility and maximum flexibility in video security to protect the millions of passengers who depend on their service. 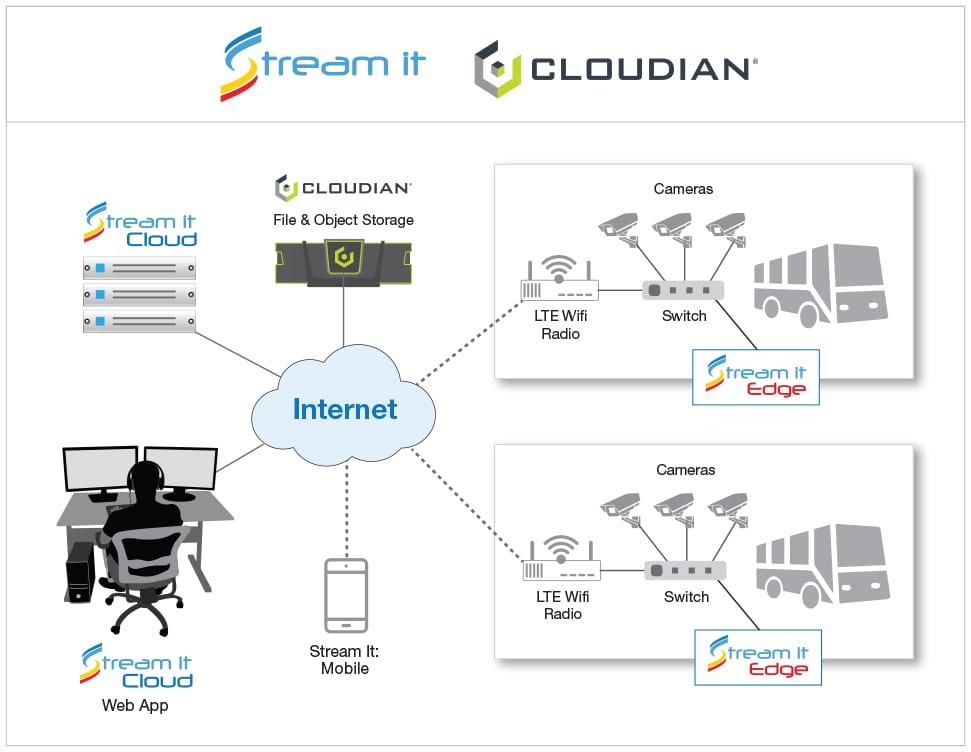