Applications are driving the escalating need for cloud storage and the public cloud providers saw it coming years ago. Amazon’s foresight dates back to early 2006 when they launched the Amazon Simple Storage Service (S3), a massively scalable and cost effective cloud storage solution developed specifically to house the massive influx of data being created by organizations worldwide. We have since witnessed several milestones for the public cloud giant including the number of objects stored in S3 grow to over 2 trillion, 40 price drops on the service, and the development of a burgeoning ecosystem of over 350+ compatible applications. It’s clear that Amazon has established itself as the dominant leader in public cloud storage. Now hybrid cloud storage is getting its turn in the limelight. For the enterprise, flexibility, control, and resilience are at the forefront of their concerns and hybrid cloud is rapidly shaping up to be the solution of choice for their storage needs. In fact, a recent Rackspace survey indicated that over 60% of the enterprise IT departments surveyed planned to deploy hybrid cloud over the next 3 years.

Amazon S3 holds twice the market share of all its closest competitors combined, so it’s likely that the storage platform of choice for on-premise hybrid or private cloud deployments largely depends on its compatibility with S3. With no standards enforced for claiming S3 compatibility, choosing the right storage platform can be tenuous.

So what does it mean to be S3 compatible? And why does it matter?

Compatibility with the S3 API can mean the difference between a good decision and costly and time intensive mistake. Understanding the S3 API and the varying levels of compatibility storage platforms offer can seriously impact the outcome for those of you that plan to stand up hybrid or on-premise clouds.

An example of a storage platform that can claim simple compatibility is SwiftStack. Using middleware called Swift3, SwiftStack can perform the above operations through the S3 API.

If an application requires just one more operation to be performed through the S3 API other than the 9 “Simple” operations listed above AND you don’t want to have to rewrite your application APIs, then you need to look to storage platforms that carry a bit more robust compatibility. The chart below shows the 9 simple operations (in red) with the addition of 18 moderately complex operations (in yellow). In order to be considered moderately compatible, a storage platform should be able to perform the majority of the 27 operations listed below:

One such storage platform is the open-source unified storage platform, Ceph. Based on the above chart, it can boast “Moderate” S3 compatibility, though robust as it is, even it cannot perform 100% of the operations listed above.

For those of you that desire peace of mind, knowing that the applications you have written that speak S3 and/or all 350+ S3 compatible applications will continue to work seamlessly with your hybrid or on-premise cloud, then choosing a storage platform that boasts advanced compatibility with the S3 API is vital. Of the 51 operations available through the S3 API, 24 of them are considered advanced. Below is the total set of operations available through the API including simple (red), moderate (yellow), and advanced (green): 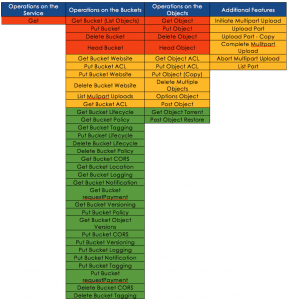 When looking at deploying an open-hybrid cloud and/or moving data between S3 and your private cloud, it is of utmost importance that you understand the level of compatibility your storage platform claims versus its compatibility in reality. S3 is not going anywhere and if you’re reading this, there is a good chance you currently use or plan to use it, either exclusively or in a hybrid cloud environment. Choosing the right storage platform for your hybrid or private cloud can save you tons of money and shave months off of your time to deploy. Compatibility matters.