As discussed in my previous blog post, ‘An Introduction to Data Tiering’, there is huge value in using different storage tiers within a data storage architecture to ensure that your different data sets are stored on the appropriate technology. Now I’d like to explain how the Cloudian HyperStore system supports object storage ‘auto-tiering’, whereby objects can be automatically moved from local HyperStore storage to a destination storage system on a predefined schedule based upon data lifecycle policies.

Cloudian HyperStore can be integrated with any of the following destination cloud storage platforms as a target for tiered data:

For any data storage system, granularity of control and management is extremely important –  data sets often have varying management requirements with the need to apply different Service Level Agreements (SLAs) as appropriate to the value of the data to an organisation.

Cloudian HyperStore manages data tiering via lifecycle policies as can be seen in the image below: 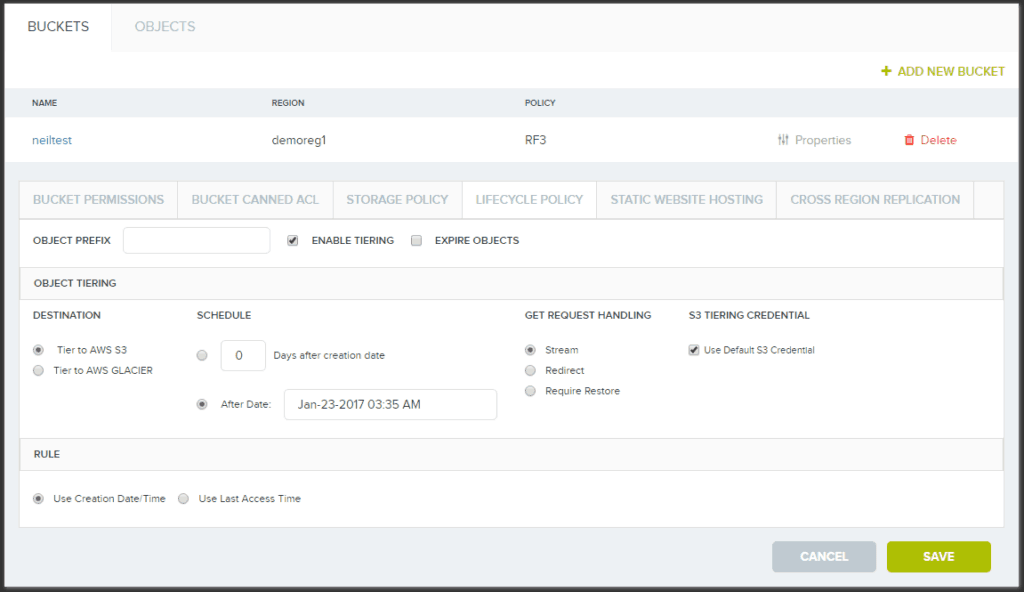 Auto-tiering is configurable on a per-bucket basis, with each bucket allowed different lifecycle policies based upon rules. Examples of these include:

When a data object becomes a candidate for tiering, a small stub object is retained on the HyperStore cluster. The stub acts as a pointer to the actual data object, so the data object still appears as if it’s stored in the local cluster. To the end user, there is no change to the action of accessing data, but the object does display a special icon denoting the fact that the data object has been moved.

To access objects after they’ve been auto-tiered to public cloud services, the objects can be accessed either directly through a public cloud platform (using the applicable account and credentials) or via the local HyperStore system. There are three options for retrieving tiered data:

A copy of the data object is restored back to a local HyperStore bucket from the tiered storage and the user request will be performed on the data object once copied back. A time limit can be set for how long to retain the retrieved object locally, before returning to the secondary tier.

This is considered the best option to use when accessing data relatively frequently and you want to avoid any performance impact incurred by traversing the internet and any access costs applied by service providers for data access/retrieval. Storage capacity must be managed on the local HyperStore cluster to ensure that there is sufficient “cache” for object retrievals.

This is considered the best option to use when accessing data relatively infrequently and concern about the storage capacity of the local HyperStore cluster is an issue, but performance will be lower as the data requests are traversing the internet and access costs may be applied by the service provider every time this file is read.

Storing objects in this openly accessible manner — with co-located rich metadata — is useful in several instances:

HyperStore provides great flexibility for leveraging hybrid cloud deployments where you get to set the policy on which data is stored in a public or private cloud. Learn more about HyperStore here.